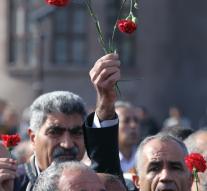 ankara - In the Turkish capital Ankara Saturday held a memorial for the bomb attack in the city last week. , Killing 102 people died . Dozens of people gathered at the train station where the terrorist attack took place.

Participants in the commemoration carried signs with the names of the victims. In Istanbul and Western Turkey Izmir were commemorations.

Last Saturday, two men blew themselves up at the station, where at that time a demonstration of pro - Kurdish parties and organizations was underway . The demonstration was against the conflict between Turkey and the Kurds. The attack was not claimed. Turkey says the perpetrators been months in Syria. In Turkey, reporting on the attack prohibited.