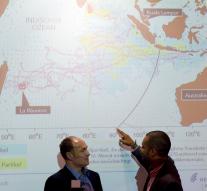 The unit of Malaysia Airlines disappeared in March last year during a flight from the Malaysian capital Kuala Lumpur to Beijing. Two thirds of the 239 passengers were Chinese.

The search for the device is still in vain. Last summer on the French island of Réunion or wing flaps of the aircraft found.

Li made ​​the announcement during a meeting with the Australian prime minister Malcolm Turnbull in Kuala Lumpur. Australia is leading the search for MH370.