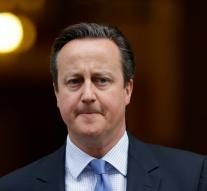 london - 'Because they defy dangers, we have peace.' Thus praised British Prime Minister David Cameron Thursday in his Christmas message to the British soldiers who are fighting in Iraq and Syria against Islamic State.

In his message, Cameron Jesus calls the 'prince of peace' and he hammers out that Britain as a Christian country must never forget that Jesus' birth represents:,, peace, mercy, kindness and above all, hope . Precisely because of this Christian values ​​is Britain,, become a successful home for people of all faiths and those with no faith , said the Prime Minister.

He also dwells on all doctors, nurses and other health care providers who give up their Christmas to care for the sick and the weak. He also devotes thoughts of many war refugees and the persecution of Christians around the world.

Meanwhile, there has been quite critical of the Christian message of Cameron. So says the National Secular Society, an association of freethinkers humanist:,, Cameron should remember that he is not a leader of Christians, but he is the prime minister is a diverse, multi-religious and increasingly non-religious nation. Political leaders must lead, not theology.