Home / World / Calais is not domiciled for refugees 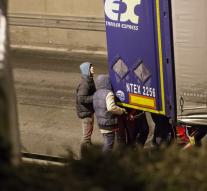 - The refugees that reside on the heath near Calais should not think that they can live there permanently. That said French Interior Minister Bernard Cazeneuve Tuesday , after the refugees had promised better medical facilities.

The number of refugees in Calais has gathered last week almost doubled. Some 6,000 migrants have settled in the northern French coastal town.

Many of them try to cross over from there to England. Cazeneuve Tuesday encouraged the people to ask for asylum in France.