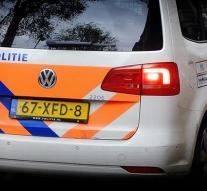 heerenveen - Police in Friesland on Saturday night to cease the pursuit of a potential burglar as he rending away with more than 200 kilometers per hour on the shoulder. That caused such a dangerous situation, the police decided to chase the car any longer.

Saturday night there came a message that was broken into cars at the Abe Lenstra Stadium. The burglar took off in a car and was later seen again in the center of Leeuwarden. Cops give chase and through the Overijssel Straatweg Goutum they drove on the A32 towards Heerenveen. In Akkrum was using colleagues tried to put the car on the side of the road, but then the suspect went off at very high speed on the hard shoulder.

The investigation continues into the car and the identity of the driver, the police has announced Sunday.