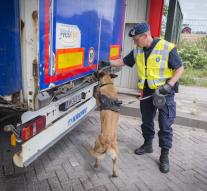 brussels - The temporary border checks that Germany and Austria have introduced to deal with the influx of refugees to the head are allowed. The "extraordinary" controls are not in violation of the Schengen Treaty, the European Commission ruled Friday.

The Schengen Convention provides for complete freedom of movement between the 26 member countries in Europe, but is certain exceptions. The German and Austrian decision was motivated by " the serious threat to the internal security because of the extraordinary influx of asylum seekers who spontaneously and frequently cross the border without valid documents ". Brussels believes that countries need for the " proportional " checks have been demonstrated.

Germany began the audits on September 13 and Austria three days later. The temporary measure has been extended several times.