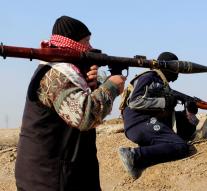 london - Britain believes that between 10,000 and 13,000 fighters of the Islamic State (IS) operating in Iraq. That said British Foreign Secretary Philip Hammond Tuesday.

The Minister added that besides Islamic State and Al Nusra fighters there are an estimated 80 000 opposition fighters in neighboring Syria.

" This is the most recent estimate I ", he held for parliamentarians.

Where does he get this estimate, he told not reach it.