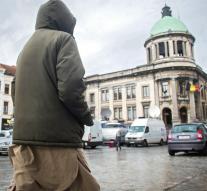 - Brussels investigating judge Friday a person as a suspect identified in the investigation into the attacks in Paris. It is one of the people Thursday in a series of house searches had already been arrested. The person concerned is suspected of involvement in activities of a terrorist group and participating in terrorist attacks. This was reported by the federal prosecutor.

Three house searches in Laeken, Jette and Molenbeek, found on Thursday in the investigation into the attacks in Paris. In addition, two people were arrested. And of those two was released after questioning, the second Friday is considered a suspect. Who that person is and what he or she is charged, is not yet clear.