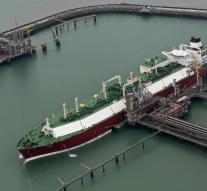 zeebrugge - In the Belgian port of Zeebrugge four Iraqis were arrested on suspicion of human trafficking. According to police, they were busy with the loading of a ship, which were found near fifteen refugees of various nationalities.

The refugees were in dire conditions in a truck that would come on the ship. It is unclear what was the destination of the ship.

It was probably planning to smuggle refugees to England. The four alleged smugglers answered. The refugees are cared for by paramedics.