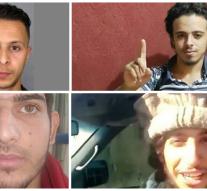 - The notorious Belgian jihadist Abdel Hamid Abaaoud, the possible mastermind behind the terrorist attacks by IS in Paris, has long been elusive to the authorities in his country.

Abaaoud (28), alias Abu Umar al- Baljiki comes from the Brussels district of Molenbeek. It is by far not the first time his name pops up. He is also seen as the leader of the terrorist cell that was rolled up in January in the Walloon town of Verviers. The terror cell would have been about to carry out attacks on police stations and agents.

Abaaoud escaped in January probably from Greece to Syria, after he recruited two terrorists were killed when they were planning an attack from a hiding place in Verviers. The security forces now also think Abaaoud after the failed attacks in Verviers is also involved in the attacks in Paris.

Grocery Son Abaaoud incidentally also stayed for the failed attacks in Belgium already in Syria. He also took his thirteen- year-old brother along. Abaaoud allegedly committed atrocities in Syria. On images to see how he drags a similar number behind his car. He was presumed dead after a time pictures of his body on social media had appeared. Possibly that was put in scene.

After the foiled attacks in Belgium Islamic State portrayed him as a hero. In an interview in the glossy magazine IS Dabiq he tells his story. He recounts how he was able to travel quite easily back and forth between Syria and Belgium and Belgium that he sees as a target because it is one of the countries which " Muslim attacks " Iraq and Syria.