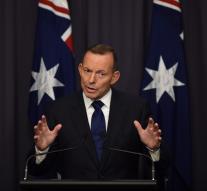 canberra - The Australian government wants to impose a new law fourteen years of terror suspects restrained. So far, the movements and activities of suspects could only be restricted if they were older than sixteen, reports the Australian newspaper The Age.

The amendment follows the murder of a police officer. A fifteen year old boy who was possible radicalized, opened early this month at a police station in Sydney fire, causing an employee was killed. Then the boy was himself shot dead. He was an Iraqi- Kurdish background and was born in Iran. The shooter was not in the picture to the police or anti-terrorist services.