Home / World / Arrests in Mali after attack on hotel 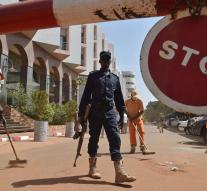 bamako - Two people Thursday in Bamako, capital of Mali, arrested because they are suspected of involvement in the attack on a hotel almost a week ago. The two suspects were by a special commando unit captured in the Missabougou district on the eastern edge of the city.

The attack and hostage-taking in the hotel Radisson Blu November 20 were at least twenty people slain.