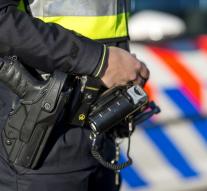 breda - A 29-year resident of Breda was arrested on suspicion of written threat from a member of that church.

Reported BN De Stem. The police did the past few weeks investigating the suspect, who was earlier because of similar offenses in the picture. The police not only investigate the threats, but also focuses on a second case where the suspect may be involved in. That comes to threaten and extort a Bredanaar (35).