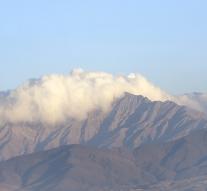 wana - Islamic militants from Afghanistan have slain Tuesday seven Pakistani soldiers. Pakistan says the attack is increasing the pressure on the strained relations between the neighbors.

The dead belonged to the paramilitary border security. They were shot dead near the border town of Wana, in the mountainous region of South Waziristan. The two countries accuse each other regularly that they are doing too little to combat Taliban and other militants. In particular, the Taliban are on both sides of the border active.

Afghan President Ashraf Ghani has since taking office in 2014 sought to strengthen ties with Pakistan in an effort to fight extremists in the border area. This initially led to some relaxation. For example, talks between the Kabul government and the Taliban held in Pakistan. After the death of Taliban founder Mullah Mohammed Omar hardened relationships again. Afghanistan accuses Pakistan, in particular that it provides shelter Taliban fighters.