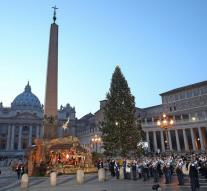 - A study in the Vatican for possible financial malpractice has led to a surprising discovery. Hidden in the office of a priest, behind an old canned Vienna sausages, investigators found $ 20,000 cash. That German media report Wednesday.

The money was seized and the spiritual, Mauro Ugolini, has been suspended with immediate effect. The chief of the priest, the 67-year-old German cardinal and former Bishop of Regensburg Gerhard Ludwig Müller, must make a statement shortly. It is unclear whether in the religious congregation where both clergy are employed, there is a real financial scandal.