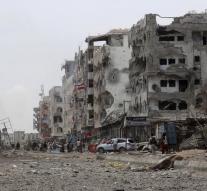 aden - An attack by an anti-tank weapon on Sunday killed the governor of the Yemeni port city of Aden and several of his bodyguards. According to various media in the Middle East, including Al Jazeera, at least six guards were killed. About the perpetrators is still unknown.

Aden is the city where President Abd- Rabbu Mansour Hadi to was deflected. In the capital of Yemen, Sanaa, Shiite rebels have a say. Those so-called Houthis are at war with the weak government of the country. A coalition led by Saudi Arabia carries out strikes on them. This also regularly attack civilian deaths.