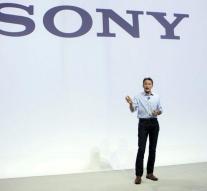 - Next year Sony decides whether or not to continue with his ailing smartphone division. That Sony boss Kazuo Hirai confirmed today.

"We will continue the division as long as we are on track to break even next year. Otherwise, we do not exclude that we will consider alternative scenarios", according to the CEO. After several loss-making years, Hirai managed to run a successful restructuring at Sony. Recent results show improvement due to cost savings and the exit of underperforming divisions, such as PCs. Components such as image sensors and video games show solid growth.

However, Sony's smartphone business remains a difficult issue. The company, like other Japanese electronics manufacturers struggling to compete with both cheaper Asian rivals as competitors such as Apple and Samsung. The phones from Sony, including the Xperia series, have in homeland Japan, a market share of 17.5 percent. In North America it is less than one percent, according to figures from the company itself.

The prognosis for its mobile communications unit reduced the company to an operating loss of 60 billion yen in the current fiscal year. Earlier estimates have anticipated a loss of 39 billion yen. I have a feeling that shows the turnaround in our electronics business progress. The result of three years of restructuring beginning to show, said Hirai. However, we still have to undergo restructuring in smartphones.