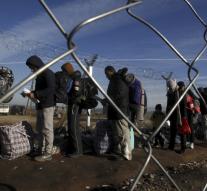 geneve - Countries that keep Syrian refugees because they are Muslims, creating a breeding ground for Islamic State and other militant movements. That the UN refugee chief Antonio Guterres said Monday. "Those who say that support terrorist groups and which to stand to recruit much more effective. "

Certainly one of the perpetrators of last month's deadly attacks committed in Paris, came as refugees to Europe. But for those attacks speaking countries with bans refugees or shut it actually borders.

Much of the rhetoric about Muslim refugees comes from the United States. As the Republican presidential candidate Ben Carson spoke about Syrian refugees as " a rabid dog who runs around you ". His rival Donald Trump proposed to close all mosques to prevent radicalized Muslims.

Guterres understand that countries leave them on counter-terror and military operations, but said it was an illusion that therefore the problem is solved. " An essential part is to persuade potential recruits to terrorist movements that this is not the way to express their anger, worry or prospects. "