Home / World / US will not fight with Russia in Syria 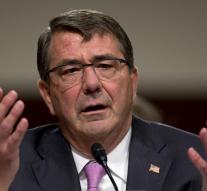 - The US military will not cooperate with Russia in Syria because the Russian strategy " tragic failure" . But Washington is ready to hold technical consultations with Moscow to try not to endanger the lives of fighter pilots from the two countries . That the US Secretary of Defense Ashton Carter , Wednesday stressed.

In Moscow, the US military's refusal to work together Wednesday strongly criticized.

A spokesman for the defense ministry said the US excuses not to have to fight international terrorism. For example, the US share information with Russia on positions of the extremists of Islamic State. Other partners in the region to do so, according to the spokesman.