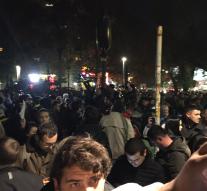 bucharest - Two victims of the fire in a Romanian nightclub, which this morning were flown to the Netherlands, his deceased shortly after arrival. One died in the transport in an ambulance on the way to one of the burn centers. The other died after arriving at the hospital.

Six, possibly seven others survived the crossing and are housed in the burn centers of Beverwijk, Groningen and Rotterdam. There they are treated in complete isolation. The patients were accompanied during the crossing by a Romanian medical team.

The death toll from an explosion in a Romanian nightclub thus risen to 38. In the last few hours died in Romanian hospitals four young visitors Colectiv Club in the center of the capital Bucharest.

Last week, Friday night fireworks exploded in the club, which was lit during a Halloween rock concert. There were currently 300 to 400 visitors at home to the occurrence of heavy metal band Goodbye to Gravity to attend.

The fireworks continued decorations on fire and the ceiling and floor within seconds. There were no or insufficient fire-fighting equipment available. Only one of the two small entrances and exits were open. In the panic that arose scores of people were trampled underfoot. In Romanian hospitals now are still about 60 victims, many of whom are in critical condition. It is feared that the death toll will continue to rise in the coming weeks and months.

The circumstances of the catastrophe in Bucharest show great similarities with the Volendam disaster in cafe Heaven in the New Year Eight of 2000-2001. It came when visitors 14 people.

The explosion in Bucharest now has major political implications in the country. Thus entered the Romanian Prime Minister Ponta abruptly after a massive demonstration of tens of thousands of Romanians who saw the evidence in the nightclub fire for surging back corruption in the country. The nightclub owner would have permits have been obtained by bribing officials. Also one of the six district mayors is because the club disaster resigned.