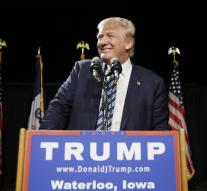 - The hotly contested US Republican politician Donald Trump returns November 7 back as host of the show Saturday Night Live in the NBC . He was previously in April 2004 .

The broadcaster had severed all ties with billionaire Donald Trump in June because of his offensive and derogatory remarks about immigrants, especially Mexicans. NBC then deleted also programs from the stable of media companies from Trump. But despite NBC announced Tuesday that Trump will again host an evening . It is almost a year before the presidential elections in the US ( November 8, 2016 ) .