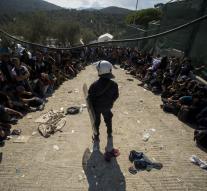 stockholm - The immigration office in Sweden is expected this year between 140,000 and 190,000 refugees, mainly from Syria and Iraq. Those numbers are so large that the government can provide sufficient houses and with the winter coming, asylum seekers, now has to place in heated tents.

Of which 190 000 people are 33 000 children who arrive without parents. Next year, expect the migration office for another 135 000 refugees. The agency expects that the additional for the reception of the influx of people a further 7.4 billion euros over the current budget.

Opinion polls show that Swedes are still for refugees, but the number of people that the politics of childcare support is less. A number of shelters was recently attacked by opponents of shelter.