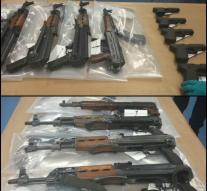 amsterdam - The OM has certainly could begin six months necessary for the substantive hearing of the trial of the huge arms find in Nieuwegein.

This emerged on Tuesday during the first pro-forma session against four suspects. Later Tuesday, the four other suspects must report. In July, the police did in a warehouse in Nieuwegein, a major arms find and called it "one of the largest ever done."

It was almost a hundred automatic weapons, small arms and grenades. Eight men from Tiel, Wijk bij Duurstede, Utrecht and Nieuwegein were arrested. The weapon finding may be related to a criminal gang, as a kind of employment agency staff, heavy weapons, stolen cars and provided resources for preparing very serious crimes.

'Alleen Boxes on naam'In the Telegraph report last Saturday about the investigation '26Koper' state that the police after she knew who was the tenant of the garages in Maurik (suspicious B.), got into the picture the other suspects.