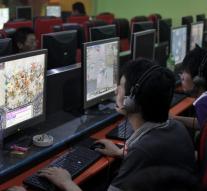 hengdian - She walked on her fourteenth after an argument with her ​​mother furiously from home in the eastern Chinese city Hengdian and was never seen again. The family of Xiao Yun lived under the assumption that the girl was dead. However, they appeared to have since her disappearance in 2005, hung in many Internet cafes in Hangzhou, 160 kilometers away.

The now 24-year-old joined her mother after a decade internet emotion in the arms, reported the Chinese newspaper Qianjiang Evening News. Xiao Yun was alive, came to light when she submitted a forged identity card in a café during a police check. During police questioning she confessed her true origins.

For ten years she lived apart from some work in the cafés where they came from and food they received from other customers. The girl enjoyed himself all the while mostly playing games on the computers.