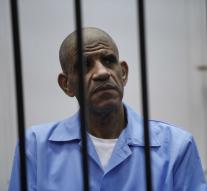 - The former spy chief of Libyan dictator Muammar Gaddafi , Abdullah al- Senussi , one of the two new suspects in the Lockerbie bombing in 1988. That is what the government in Tripoli reported Friday. The other man is Mohammed Abu Ejaila . Nothing is yet known about him .

On Thursday it was announced that Scottish and American researchers had identified two new Libyan suspects for the attack.

They would be the prime suspect Abdel Basset al- Megrahi has helped in preparing the terrorist act. Scottish OM wants to question the two together with the American investigative FBI. Senussi is already in jail in Tripoli.

He was convicted for his involvement in the deaths of protesters against Gaddafi in 2011. He was also involved in the murder in 1996 of more than 1,200 prisoners at Abu Salim prison in Tripoli.

The attack on a Pan Am plane over Lockerbie, Scotland were 270 people killed. The plane, which was en route from London to New York , was blown up in the air with a semtexbom in a suitcase. Among the dead were eleven people on the ground.