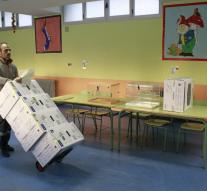 - Spain goes to the polls Sunday for what are the most unpredictable elections in recent history.

Chances are that the two parties that dominate Spanish politics for decades, the socialist PSOE and the conservative People's Party (PP) of Prime Minister Mariano Rajoy, the parliament after Sunday no longer dominant. New parties that the old guard held responsible for the dramatic economic crisis and the deep-rooted culture of cronyism, will overcome many of the 350 seats in parliament.

Spain must learn how to form a coalition government, because no one expected more an absolute majority, as the PP now has.

The polling stations open at 9. 00 am the doors. 20. After 00 hours it becomes clear how the new Spanish political landscape looks like.