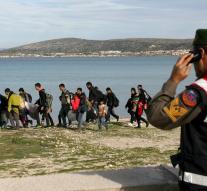 ankara - Six children of Afghan refugees have Tuesday off the Turkish coast drowned when the dinghy they were in sank. The boat was coming from the Turkish coastal town of Çesme en route to Greece. Which reported the Turkish news agency Anadolu.

The Turkish coastguard managed to rescue five people from the water, two others are missing. The bodies of six children have been recovered. The age of the children is not yet known. Among them was a baby. The Coast Guard suspects that the Afghans despite the bad weather at sea, would attempt to reach the Greek island of Chios.