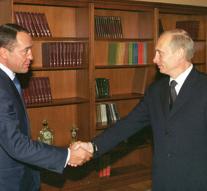 - The former Russian minister and media adviser Mikhail Lesin is Wednesday at the age of 57 deceased of a heart attack. This was announced on several American and Russian media Friday. According to ABC News, which cites American and Russian sources, the former politician was Thursday found dead in his hotel room in Washington.

President Vladimir Putin expressed his condolences to Lesins family. " The president has a deep appreciation for the efforts Lesins modern Russian mass media ", said a spokesman for the Kremlin. In 2009 the consultant was still by President Dmitry Medvedev dismissed for abuse of his position would have made.

Levin was under Putin in 2004 media consultant. He previously occupied senior posts under Putin's predecessor, Boris Yeltsin. In October 2013 he became the head of Gazprom- Media. Which function he laid down for family reasons in January 2015. Lesin is also founder of the news channel RT.