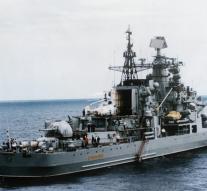 moscow - If necessary, Russia can from its warships in the Mediterranean fired missiles at targets of Islamic state in Syria . This has a senior Russian military said Friday in an interview with a Russian newspaper .

Earlier, the Russians already fired cruise missiles at IS swerving from ships in the Caspian Sea . When asked if such attacks could also be run from the Mediterranean Sea , the answer was : " Without more ".

Russia does not rule out that it will establish a military base in Syria , with ground troops and elements of navy and air force .