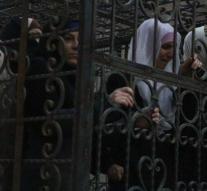 According to the Syrian Observatory for Human Rights be captured officers from the army of President Bashar al-Assad and relatives of those soldiers used as human shields. It is not known which rebel group may be using human shields.