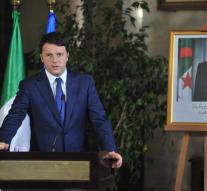 - Italian Prime Minister Matteo Renzi has called for a rapid uptake of Albania, Serbia and Montenegro in the European Union. He made ​​his appeal Wednesday in the online edition of the German newspaper Die Welt.

He points out that the Union has just expanded to the east. But it is according to him a tragic and historic mistake to exclude the Balkans. " The accession of Albania, Montenegro and Serbia in the Union should have priority ", said Renzi. In addition to these three countries also endeavor Macedonia, Bosnia- Herzegovina and Kosovo for EU membership.

Given the current situation Renzi strongly criticizes the Central and Eastern European EU partners on the basis of their refugee policies. Renzi : " The West Europeans have paid a political price for enlargement. It is not good for these countries to dictate morality. "