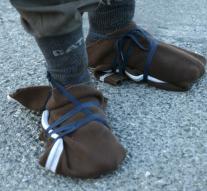 strasbourg - A quarter of the population of the European Union live around the poverty line and is at risk of social exclusion. That the EU's statistics agency , Eurostat, reported Friday.

These are people who have low incomes, barely possessions or live in a household where (almost) nobody works. Their number was down slightly in 2013, but rose again in 2014, Eurostat said.

How high is the poverty line differs from country to country depending on the standard of living. In the Netherlands, creates poverty at a net annual income lower than 12, 535 euros for a single adult. For a family with two young children the limit is 26 322 euro.

People in these circumstances often can not pay the rent, have no money for heating or every day a decent meal, can not go on vacation and have no car, washing machine or (mobile) phone.