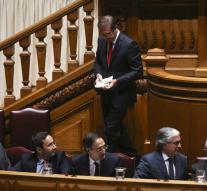 The government was formed after the parliamentary elections on October 4th. The center-right Social Democratic Party of Passos Coelho remained the largest, but lost the majority. The Socialist Party (PS) has an alliance with the radical left Left Bloc and the Communist Party closed to bring Passos Coelho fall.

Mário Centeno PS Tuesday in the Financial Times emphasized that a leftist government is not suddenly going to throw money and bring the economic recovery at risk. " We challenge the course not, but the pace ", said Centeno, who probably Maria Luís Albuquerque succeeds as finance minister.