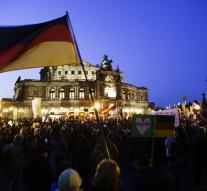 dresden - The German police is preparing for a massive commitment to the celebration of the first anniversary of the anti-Islam movement Pegida Monday in Dresden . Expected by the tens of thousands of people on their feet , both supporters and opponents of the "patriotic Europeans against Islamization of the West ."

Police Dieter Kroll has all protesters urged to ensure " that Monday without violence remains ". Special communication teams are deployed to prevent escalation.