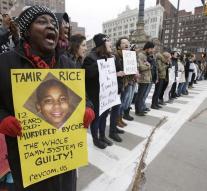 cleveland - A policeman at the end of November 2014 in the US Cleveland a twelve year old African-American boy, Tamir Rice, shot dead, will not be prosecuted. A jury has decided this Monday in the city located nearly 500 kilometers northwest of Washington. His partner during the incident, Officer Frank Garmback is not prosecuted reported the Public Prosecutor.

The white officer Timothy Loehman shot November 22, 2014 almost immediately after he arrived at a park on the boy who was holding a toy gun in the park. Survivors and activists have challenged the procedure followed by the jury and demand prosecution of the shooter. But according to the prosecution's Rice killed by a human error and not by the officer committed a criminal offense.