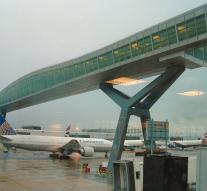 london - Part of London Gatwick airport is evacuated Saturday. According to British media it comes to the North Terminal. It is still unknown what the reason for the eviction.

Via Twitter to report several people that there would be a suspicious package found. North terminal #Gatwick Airport in London vacated due to " safety ". pic. twitter. com / y4NoT6A6nk- Terrorism Monitor (TerreurMonitor) November 14, 2015
NEW