Home / World / Obama : together with Israel against terrorism 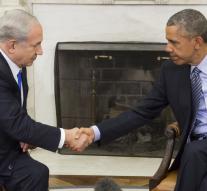 - US President Barack Obama said that despite the disagreements over the nuclear agreement with Iran, the US should work with Israel against terrorism and the quest for peace with the Palestinians. Obama and Israeli Prime Minister Benjamin Netanyahu met Monday in Washington for the first time since the signing of the nuclear pact.

Netanyahu's visit was overshadowed by a continuing wave of Palestinian attacks on Israelis at a time when Obama has concluded that a peace agreement is out of range during the last fourteen months of his presidency.

Israeli Prime Minister emphasized his commitment to a two state solution to the Israeli-Palestinian conflict, but also suggested that the Palestinians, in turn, must recognize Israel as a Jewish state, something they refuse until now.

Obama condemned the recent wave of Palestinian violence and supports the right of Israel to defend itself, but also said he wants to hear how Natanyahu thinks the tensions reduce. The two also discussed the negotiations on a new package of American military aid to Israel.

The two leaders are clearly disagree on the issue of nuclear agreement with Iran. " It's no secret ", Obama said. " But we have no disagreement ensuring that Iran not receive any nuclear weapons ", he added.