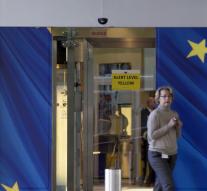 brussels - There is no specific threat of an attack on the European institutions. That said a spokesman for the European Commission Monday, based on information from the Belgian authorities.

" Despite the higher threat level in Brussels, the Belgian authorities have confirmed to us that there is no specific threat against the European institutions, including the European Commission ", said the spokesman. However, the security at the premises of the committee has been tightened slightly. For example, all cars and luggage checked before they are allowed into the building, he said.

The spokesman said that all meetings continue, but that events are canceled outside the commission buildings. " We are working calmly. "