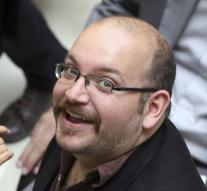 - The Washington Post Monday denounced the sentencing of its correspondent in Iran for spying as "an outrageous injustice". The American newspaper urged Iranian leaders to reverse the verdict.

Jason Rezaian who was arrested in July 2014, has twenty days to appeal against the sentence, reported the Iranian news service ISNA. Given the sensitive relationship of Iran and the United States the detention of the correspondent was a difficult issue for both countries. The content of the judgment has not been made public as yet appeal.

According to The Washington Post is the verdict not to defend against Rezaian and there is no penalty announced. "The condemnation of Iran in the trial of Washington Post correspondent Jason Rezaian is a scandalous injustice", said chief editor Martin Baron. According to newspaper Tehran would Rezaian as a bargaining chip to use and behind the scenes work on a political solution.

Iran accused the 39-year-old Rezaian of having confidential information collected and gave to hostile governments.