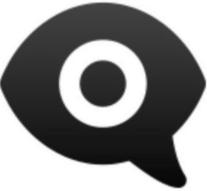 - For months, speculation about it. What is the mysterious image of the eye in a cloud signed to mean anyway ? The symbol is available from the other new emoji 's after the release of iOS 9.1 but what it represented eye, was not entirely clear. Mashable claims to have solved the riddle.

The picture can be found in Apple's iOS operating system 9. 1 for iPhones and iPads, among other emoji that people use, inter alia, WhatsApp and internet. The new picture is an eye in a black cloud. According to Mashable symbol has been specially designed with a charity in mind. It would be intended to be of support to people who are being bullied. People can use it if they encounter bullying online or in conversations.

The image of the eye is also reflected in a new campaign against bullying of the organization Ad Council called I am a Witness. Apple 's partner in the campaign, as well as include Google, Facebook and Twitter. The companies intend committed against digital bullying. The campaign coexists with the emoji Apple inter alia ads, a new filter Snap Chat and YouTube videos with famous people.