Home / World / Muslim League in the US received powder letters 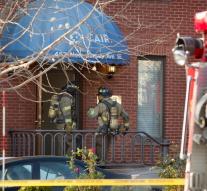 - The headquarters of one of the largest Muslim joined in the United States Thursday local time been just vacated. The office in Washington had received a letter that had white powder in it. Preliminary testing of the authorities, the substance harmless, then the employees could return to work.

The letter was delivered to the Council of American-Islamic Relations (CAIR), also contained threatening language : " Die a painful death, Muslims. "

However, the main office was not the only location where a powder letter was delivered. Earlier in the day received an office of CAIR in California's Santa Clara also a letter with content. The building was evacuated then.

The FBI is aware of the letters and will further analyze the substances.

The fear is good at in the staff of the CAIR. " It's frightening when hate how close. But this prevents us not to proceed with protecting civil rights and freedoms for all Americans ", according to the lawyer of the CAIR Maha Sayed.

In America much around Muslims. So will the Republican presidential candidate Donald Trump " a total and complete stop " of all Muslims entering the United States. Furthermore dominates the massacre last week wreaked news in San Bernardino. The man and the woman who was behind the shooting, were supporters of Islamic State (IS).