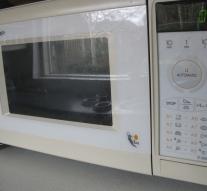 sacramento - An American her daughter one month has put into the microwave, got life imprisonment. According to the US system is that a sentence of up to 26 years.

Yang was in March 2011 just a moment alone with the girl, Marabelle Thao-Lo. That was enough for the woman to stop the child 2.5 minutes in the microwave. The girl was left with severe burns on the authorities, reports the American channel KCRA.

Yang told police that she had first had a seizure and the child when she awoke had found in an electric heater. Investigators, however, found a pacifier melted in the microwave, which the woman confessed.