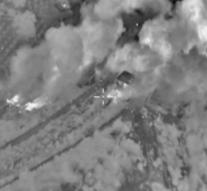 The bombings , stocks, infrastructure and ground staff in Syria of the Russian Air Force as well as the firing of missiles from warships, the Treasury until now have cost between 70 and 100 million euros. The air attacks began on 30 September.

The newspaper writes that it seems little, compared to the total defense budget of around 44 billion euros. The Kremlin sees the costs and obligations are growing rapidly . Moreover, the conflict in Syria might well take years.

About 36 Russian aircraft and twenty helicopters take part in the attacks . In recent weeks they performed together about forty flights per day , according to the Defense Department. The Russians have stationed approximately 1500 to 2000 ground staff in the country of ally President Bashar al- Assad.