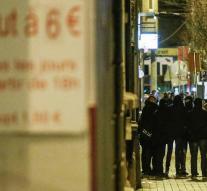 brussels - In several Belgian places Thursday arrested six people who may have something to do with plans to carry out attacks during the New Year celebrations in Brussels.


The six were taken in for questioning after raids were done in, among other Molenbeek and Anderlecht. That the Belgian judicial authorities reported.
The arrests follow the arrest of two men Wednesday who would carry out attacks in Brussels. The two, Said S. and Mohammed K., stuck the next month. Said S. is considered a leading figure. He would have recruited people to commit terrorist attacks. The pair are accused of participating in a terrorist group.
The New Year's festivities in Brussels and the accompanying fireworks are canceled Wednesday.
NEW