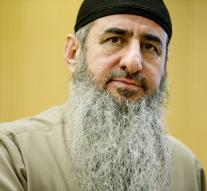 - When picked up a coordinated action its leaders and members of Rawti Shax, the terror network headed by Mullah Krekar. The action took place in Italy, the UK, Norway, Finland, Germany and Switzerland. This was announced by Eurojust, the judicial cooperation of the European Union.

On a total of 26 places raids are conducted, inter alia, electronic equipment and documents were seized. Not all suspects were arrested ; some of them appeared to have fled to the Middle East. Mullah KrekarHet investigation that led to arrests, was established by law in Italy and has been running for years. In particular, Switzerland and Germany have contributed to the mapping of the terror network. Rawti Shax comes from Ansar al-Islam, a Kurdish terrorist organization who worked closely with al- Qaeda. The purpose of the network is to overthrow the secular government of the autonomous Kurds in northern Iraq and replace them with a caliphate.
NEW