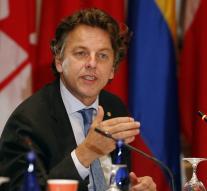 luxembourg - It is essential that the European Union has a common position on Syria. That said Foreign Minister Bert Koenders Tuesday in Luxembourg prior to consultation with his European colleagues. The European disapproval of the Russian bombing of the moderate opposition against President Bashar al-Assad 's what Koenders is a clear signal.

"With the Assad regime can be discussed , but through the United Nations", Koenders summarized the European position together . In any transitional government should the army and the state are represented, the EU ministers agreed Monday came . "In the long run, there is certainly no future for Assad", he said. "Not only for moral reasons , but also because of the fact that he is responsible for all those dishes bombs."