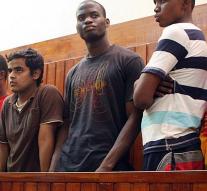 - Michael Adebolajo, killer of British soldier Lee Rigby, the prison where he is suing because he lost two teeth.

Rigby (25) was on May 22, 2013 in broad daylight in London killed by two Muslim extremists. Michael Adebolajo received a life sentence and Michael Adebowale received a life sentence with the possibility of revision after 45 years. The Muslim converts Rigby drove with their car and then killed him with a machete. Bystanders saw the men Rigby nearly behead with the weapon. Adebolajo, covered in blood and with the murder weapon still in his hand, spoke into the camera from retaliation for those who died at the hands of British soldiers abroad.Adebolajo is in the Belmarsh prison. Two years ago when he was restrained by guards, he lost two front teeth. There he now wants compensation. The size of the amount is not known but similar cases have resulted in an amount of approximately 20 000 pounds sterling. Adebolajo proposes five guards responsible for the incident.Internal earlier research was done on the course of action of the guards, but they were then vindicated.
NEW