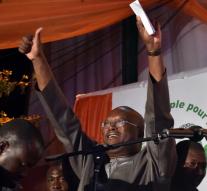 ouagadougou - In elections in Burkina Faso Roch Marc Kaboré elected the new president of the African country. He is the successor of Blaise Compaoré, who resigned in October last year and fled because of mass protests.

Kabore received by the Electoral Commission 53.5 percent of the vote. Its closest competitor Zephirin Diabre got no further than a narrow 30 percent. Diabre has recognized his defeat and his congratulations via Twitter transferred to Kabore.

The population could for the first time in a long time back to the polls to elect a new leader. The country is known for its many coups. In September, Burkina Faso was rocked by a violent coup. Under great pressure had hundreds of rebellious soldiers from the presidential guard to surrender. They had the prime minister Isaac Zida captured. The leader of the coup, General Gilbert then Dere, was arrested.

The failed coup elections were later than planned. They would be held namely in October.