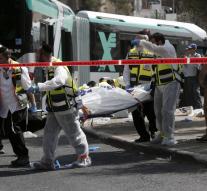 jerusalem - A Jewish Israeli who presumably wanted to take personal revenge after several acts of Palestinian terrorism on any Arab, was mistaken and another Jewish Israeli stabbed to death. The fatal attack happened Tuesday in place Kiryat Ata , near Haifa.

According to the newspaper Haaretz that the perpetrator took the victim was an Arab, " because of his Middle Eastern appearance ". Earlier in the day an attack on bus passengers took in Jerusalem , probably by Palestinian militants, two Israelis living. Eighteen people were injured.

Palestinian organizations have called their people to a " day of rage " against Israel. Israeli Prime Minister Benjamin Netanyahu performs Tuesday emergency meeting over the violent outbursts with other ministers and security.