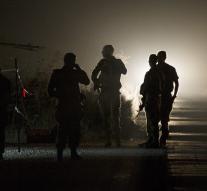 jerusalem - An Israeli is Saturday night with a paraglider crossed the border with Syria. It is an Israeli Arab who belongs to the Muslim minority in the country. The 23- year-old man will probably join the army, according to Islamic State or another militia.

The man flew from the Golan Heights against the wind, which indicates that he does not accidentally the wrong side was blown up. The army also assumes a planned action.

Israel has forbidden residents to travel to Syria. Yet more than forty Arabs and Palestinians have made ​​the crossing to support IS, according to Israeli security.